Apart from being a harmonious tableau of beautiful images, Switzerland is home to a hearty traditional cuisine. Stay with me as I find out what’s cooking in the land of four languages 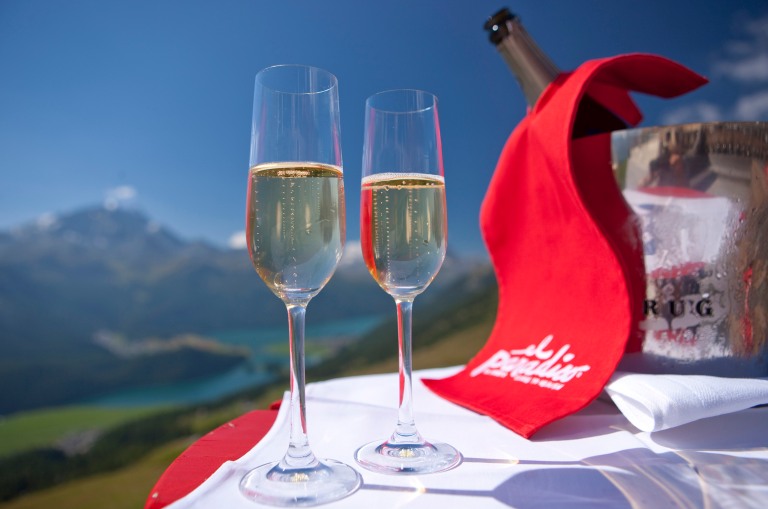 While Switzerland borders France in the West, Germany in the north, Austria and the principality of Liechtenstein in the east and Italy in the south, you can only imagine its culinary diversity.

Gooey cheese, velvety chocolates, an amazing mix of light-to-full-bodied wines, air-dried meats, succulent Olmabratwurst sausages, traditional specialties like Chäschüechli (savory cheese tarts) and Biber (a thick gingerbread cookie filled with marzipan and glazed with honey) and one can go on and on. Eating and drinking in Switzerland – the heart of Europe – is truly a journey through four different cultures. 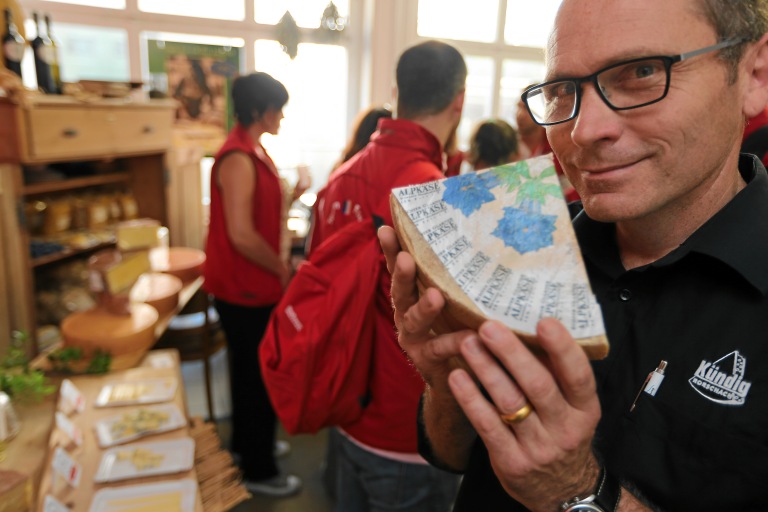 Some easy ways to taste these cross-cultural flavours are organising picnics at farmers markets, touring vineyards, and meeting local chefs and chocolatiers. Most towns host Saturday farmers markets, typically opening early in the morning. Operating hours may be based on the season, so ask around at your location. At these atmospheric markets, you can readily sample more than 450 types of Swiss cheese fresh from the mountains, along with cervelat (sausage produced in Switzerland) and other sausages. According to an online magazine, locals see Switzerland much more as the land of bread than of cheese or chocolate. Yes, the Swiss love their bread, and yet it remains the most undervalued food item here. Switzerland has more than 200 types of bread, including varieties from each of the 22 Swiss cantons. Try the braided zopf, a soft bread served with jams or bündner birnenbrot, a pastry-like loaf loaded with raisins, nuts, and various dried fruits.

If you’re looking for options to dine out, this stunner has something for every kind of foodie. You’ll encounter budget-busting Michelin three-star restaurants, more affordable cafés, brasseries, après-ski lodges and more. Savour the flavours, intoxicating aromas, and distinctive tastes of the region while soaking in the beauty of its rugged, appealing landscape. 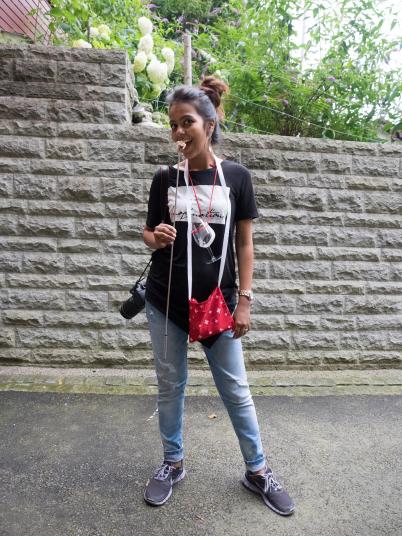 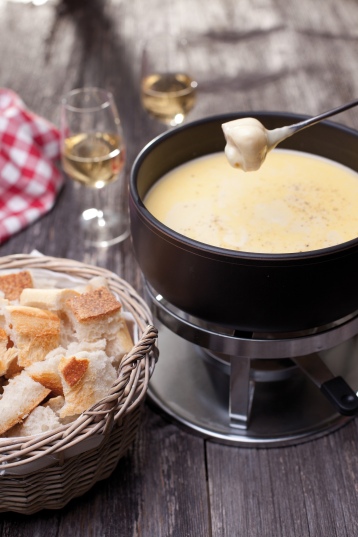 If there’s one dish that’s deeply woven into the country’s fabric, it’s cheese fondue. For centuries, Swiss living in the mountains relied on fondue to satiate their hunger pangs in colder months. Even today, they are quite traditional with their fondue, sticking to domestic favourites like Emmentaler, Gruyère and Vacherin rather than mixing things up with foreign varieties like cheddar. Dunk rustic country bread and boiled potatoes into melted cheese, infused with wine and garlic, bubbly over an open flame. When at a restaurant or visiting Swiss friends, pair fondue with wine, schnapps or tea; they help you digest the melted cheese better. Don’t hesitate relishing the crust that forms at the bottom of the caquelon (fondue pot) which the Swiss call “religieuse”. You’re sure to agree with the 1980s advertising slogan “La fondue crée la bonne humeur” which means “fondue puts you in a good mood”!

Visit the Heldsberg Fortress Museum for an extraordinary excursion followed by Swiss fondue dinner. Dip your sides of fresh bread and baked potatoes in a melted pool of warm cheese, and pair it with some local wine that’s poured into your wine glass necklace. Yes, you heard it right! Here, you can wear your wine glasses around your neck to make sure your hands are absolutely free for the cheese-dipping task.

TIP: Never ask for chocolate fondue here. It isn’t a traditional Swiss dish, but a modern invention from New York.

ANOTHER CHEESY DELIGHT
Raclette is another cheese-lover’s favorite. Half a block of cheese is customarily grilled slowly over a fire until it melts and has a crispy edge. The melted cheese is scraped off layer by layer onto a pre-warmed plate and served with Gschwellti (jacket potatoes), cocktail gherkins and onions as well as pickled fruit. 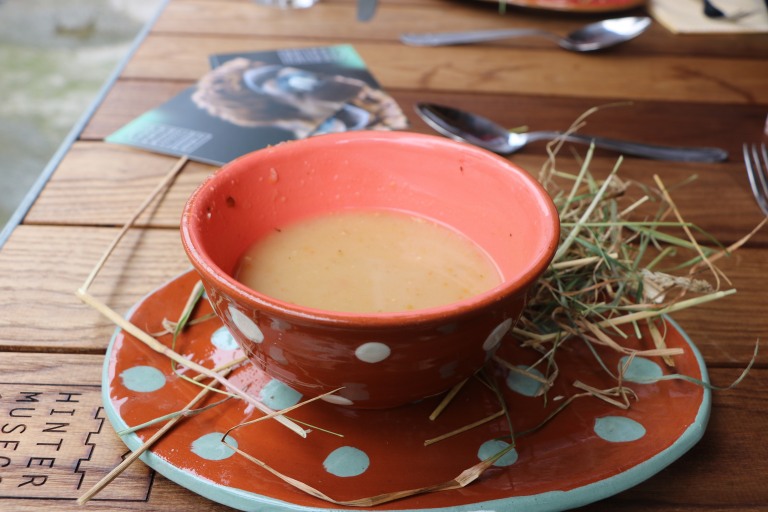 Hay isn’t just for cattle, goats and sheep. The dried grass, which commonly serves as animal fodder, is used to prepare a rather unique tasting soup. The Swiss simply call it “hay soup”. While there are different versions that come from the mountainous cantons of Valais and Graubünden, the warming drink usually contains vegetable stock, cream and butter, with the hay boiled for 30 minutes and strained, just like tea leaves. Don’t be surprised if the soup is prettily presented on a bed of hay and garnished with dried meadow flowers!

Rösti for a potato fan 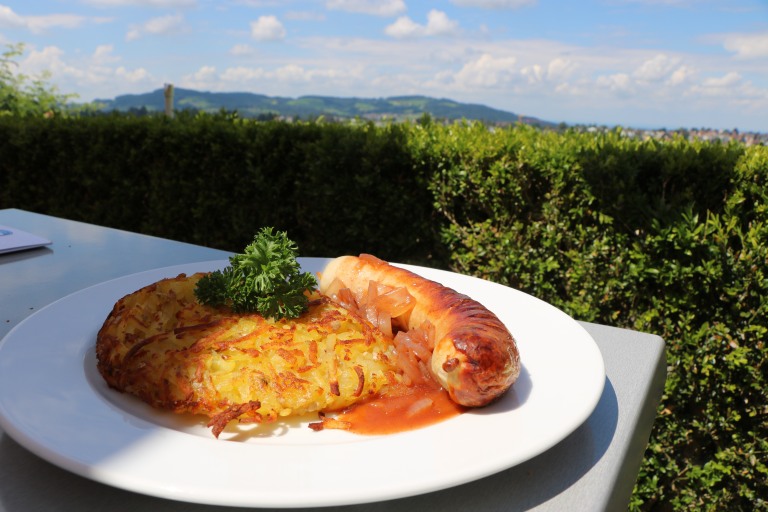 If the sausage is from Alpine pigs who spend time grazing in the pastures high up mountains and feeding on milk left over from cheesemaking, you’re indeed lucky!

A flat, hot cake made out of thinly-grated potatoes, pan-fried until crisp and golden, Rösti or Röschti is one of Switzerland’s iconic national dishes and a must-have if you’re visiting the German-speaking part. The dish is bound by nothing apart from the starch contained in the potatoes and is served in many variations throughout the country and across mealtimes. The most popular one is with Bratwurst (German sausage) – milk and eggs blended together with pork and veal to create a creamy texture – and onion gravy. 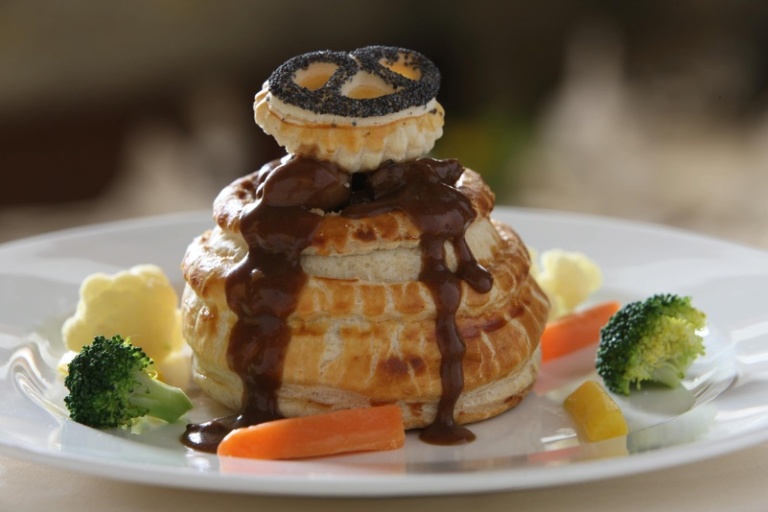 Central Switzerland, particularly the city of Lucerne is famous for Luzerner Chügelipastete – a vol-au-vent filled with sausage meat balls doused in white creamy sauce. Dating back to the 18th century, it is one of the city’s historic specialties and is served as the highlight of the Safran Guild’s (Society of Grocers) annual ‘Bärteli Meal’ on January 2. The pie owes its name to Fritschi, Lucerne’s famous carnival figure.

TIP: To sample a very authentic version of this high-calorie yet delectable speciality, plan your dinner at Restaurant Lapin Museggstrasse 2, 6004 Lucerne. The chef here will be happy to demonstrate the making too! 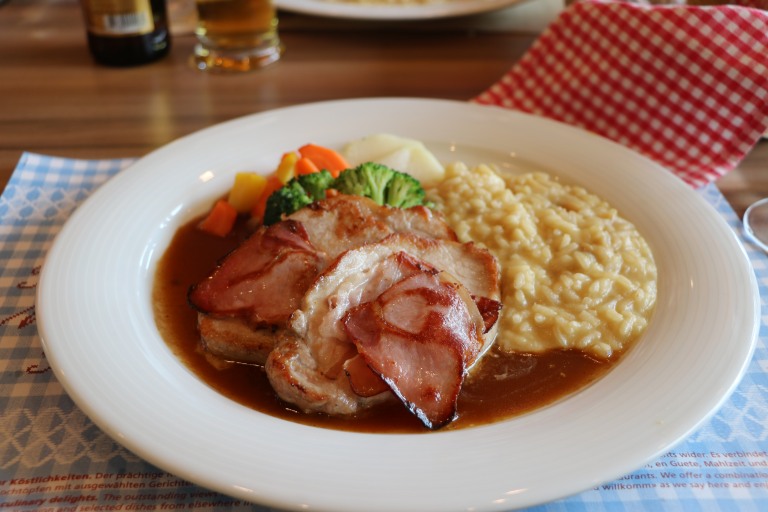 Coming from Ticino – the Italian speaking region of Switzerland, Saltimbocca with Risotto is an utterly delicious quintessential northern Italian dish. Saltimbocca is usually made from veal scallops, sage leaves, and Prosciutto di Parma (dry cured ham), and risotto alla Milanese is made with veal stock, red wine, saffron and a good amount of butter. Polenta (a corn puree which is mixed with cheese and served as a main dish or accompaniment), Marroni (sweet chestnuts), Amaretti (small macaroons) and Gazosa (clear, non-alcoholic, sweetened fizzy lemonade) are other Ticino favourites. 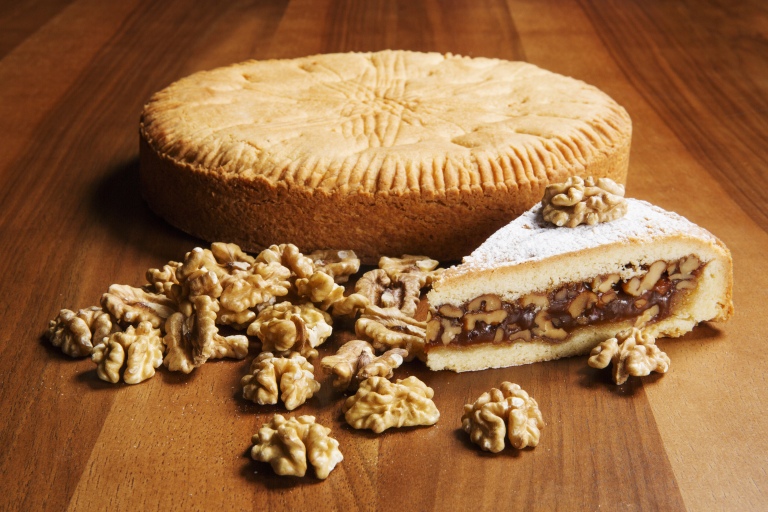 Engadine nut tart is made from fine, buttery shortcut pastry that comprises a filling of cream, caramel, honey and walnuts. An absolute classic among the regional specialities

A MEAL WITH A VIEW
You can’t miss the experience of having a typical Swiss meal at one of the charming mountain restaurants. 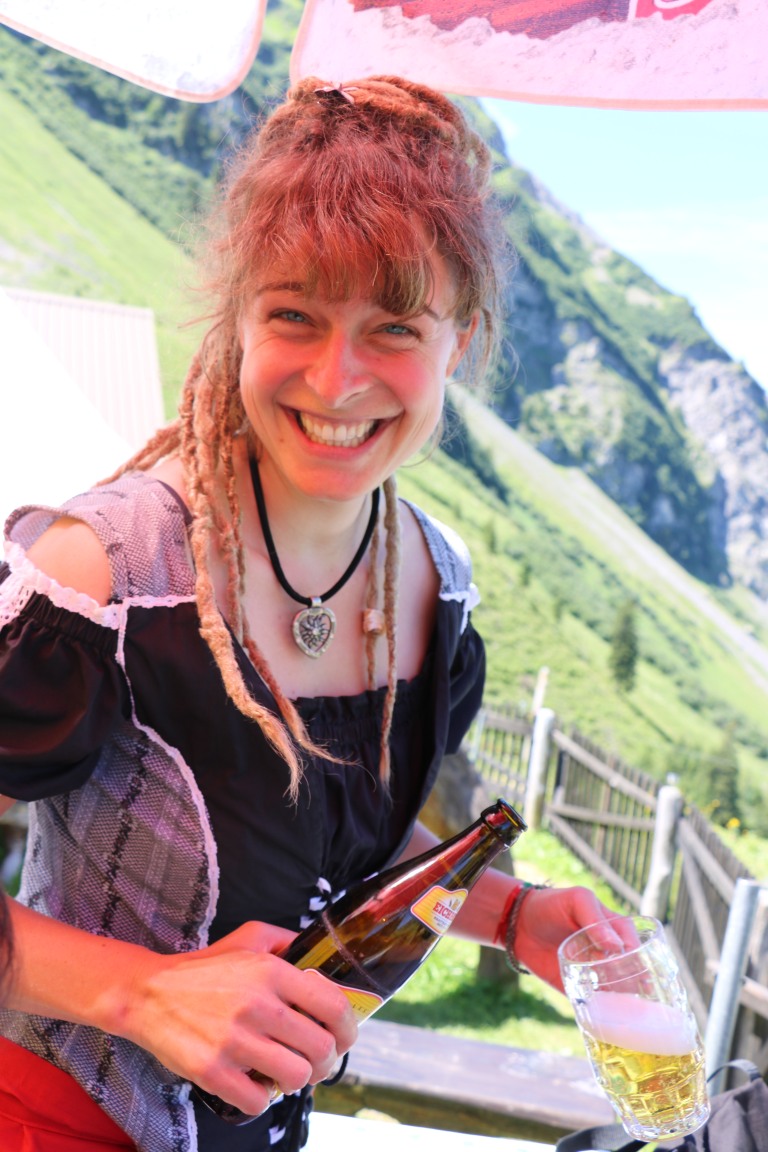 Located at the Sittlisap in Uri Canton, Alp Obsaum is a simple wooden inn that guarantees unforgettable peace, originality and views over the Schächen Valley. Open from June to September, you can only reach this place on foot. 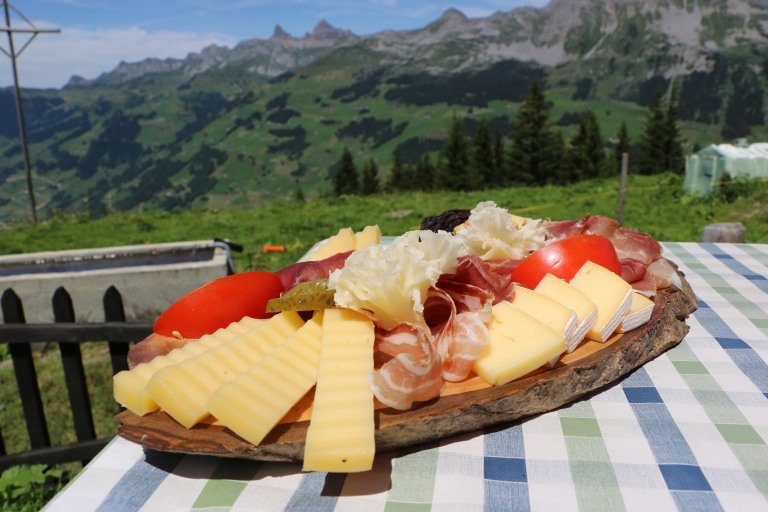 Let a picturesque hike whet your appetite for Alp specialties like Gerstensuppe (Swiss barley soup), Zabigplattli (meat and cheese platter), ginger bread, Hütten coffee and a glass of chilled local beer. What’s more? The owner of this little mountain restaurant serves you all the good food along with a live music performance. Oh so satisfying!

One thought on “SWISS CUISINE – A POTPOURRI OF INFLUENCES” 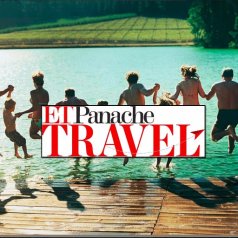 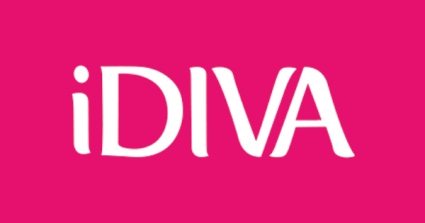 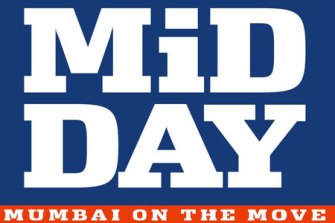 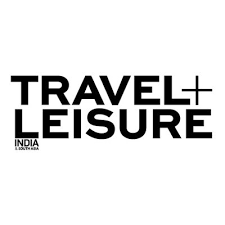 Siddis of Gir 🦁
Visit Jambur village in Sasan Gir and you feel like you're in Africa.
During my recent trip to Sasan Gir, I spent a night at thepostcardgir which is a newly-opened boutique property surrounded by lush mango orchards and the rugged forest.
Gir is the only place outside Africa where a wild lion roams free today.
"I found far more answers in the woods than I ever did in the city."
"Christmas magic is silent. You don't hear it–you feel it. You know it. You believe it."